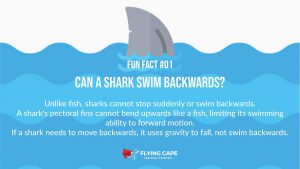 If a shark needs to move backwards, it will use gravity to fall and not swim backwards.

Two hearts pump blood to the gills, while a third circulate it to the rest of the body. They have blue blood because their blood is not iron-based like ours, but copper-based, the copper being more efficient in transporting oxygen in a cold, low-oxygen environment.

They are expected to have ‘Bird Brains’. In spite of this, the octopus is considered one of the most intelligent animals in the world. Octopuses can use tools in order to open shellfish or to hide themselves. In captivity, they have shown the ability to solve problems such as opening a bottle to get the food inside.

About two-thirds of an octopus’ brain cells, or neurons, are distributed among its arms. In this way, an octopus can perform several tasks at the same time which is why a detached octopus’ arm also reacts to pain.

Fun Fact #3: Certain species of male penguins propose to their lady mate with a pebble during mating season.